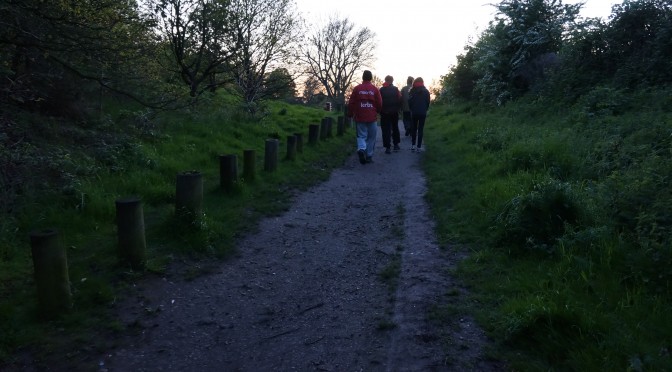 In September we offered an evening Bat Walk and an afternoon Time Walk to showcase different aspects of Shrewsbury Park.

Those enthusiasts who turned out for the Bat Walk  2 September were not disappointed; the bats chimed in with Les’s presentation and we soon headed off for an entertaining walk after sunset.  We saw several pipistrelles and kept a keen ear out for different calls picked up on the bat detectors ( no one was sure they heard another species…)  A noctule bat, 25-30 cm wingspan was almost certainly spotted flying against the cloudy sky – but bear in mind bat watchers know nothing is 100% certain with these speedy creatures.

FSP has a bat detector for you to borrow for a week’s use. If interested please go to the Bats page. Bats should be active through October.

A big thank you to Andy Brockman who shared his time, archaeological knowledge and engaging brand of storytelling, while  leading the walk through the upper parts of Shooters Hill. He dipped into social history, land use, how the roads evolved that we use today – the list was endless.

We promised to publish Andy’s answer to a question on the day about the decontamination unit on Plum Lane and here it is:

Andy: Thank you again to everyone who turned out to take part in this afternoon’s time walk on Shooters Hill. In answer to the question about what happened to the contaminated water from the showers at the Furze Lodge decontamination center, an article written in 1938, the year before the Furze Lodge building was constructed, and describing how local public baths could be converted into  decontamination centers says this,

It is presumed that the greater number of people will be just ‘contaminated’ that is sprayed or splashed with a vesicant (blister causing agent) such as mustard gas or lewisite. We will now, therefore, dispose of these first, although they may not be the most urgent cases.

The ‘unwounded contaminated’ would proceed to undressing rooms where they would discard all clothing into airtight bins, preferably placed outside a window or area. They now pass into the shower or washing rooms, t`-here showers of warm water, soap and flesh and nail brushes provide the essentials for general decontamination, all used water being run to waste.

From this it must be assumed that the authorities accepted that contaminated water would enter the local sewage system for grey water and be disposed of in the normal way.  I presume it was felt that any contamination would be diluted rapidly to the point it ceased to be a danger.

Of course in 1938 it may well have been felt that improvising effective facilities in time to deal with any crisis, was more important than any issues of potential pollution.

A set of photographs showing parts of the decontamination process taken by photographer Karl Mydans of “Life Magazine” can be found here.

I will post again if I find additional information