Welcome to our Spring edition, and thank you for your continued support to help keep our park beautiful. I am pleased to say our membership increased to 310 by the end of 2014.

We have a full calendar of events this year, including bird and bat walks, Summer Festival and cleaning sessions. John Denton has agreed to host a butterfly walk this year.  We will of course keep you informed of the events via email. For members without email, we will be putting posters up on the notice boards in the park.

Our desk calendar was a great success, so we will again be asking members to take photographs for the 2016 calendar.

A number of you have said you appreciate the new benches.  I have passed on your thanks to the Council.

We look forward to seeing you in the park.

Memories of the Park

“Then and now” by Helen Bishop

Before the big metal gates were taken for the ‘War Effort’, a bell was rung warning that the park was closing for the night – it must have been smaller then!

Peace returned and the gorse and brambles which covered the field by the railings were grubbed up. Gradually the park returned to normal.

For many years the woods were fenced off with many twisty little paths between – ideal for riding our scooters! 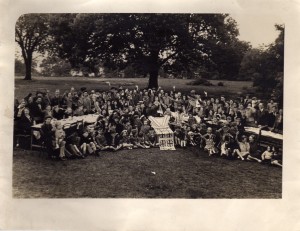 The brown-uniformed park keeper kept a strict eye out for anyone misbehaving and was quite feared by we children. He worked from a brick building next to the public loos by the present car park. Inside the loos were enamel notices screwed to the doors warning of something called V.D. We children puzzled over this; we’d recently had V.E. Day then V.J. Day, but V.D???

Later, a tea hut was erected along the path leading to the ‘big’ field, its wooden walls absorbing the not unpleasant aroma of the many urns of brewed tea.
Round the corner a boggy patch appears after rain where there had once been a pond fed by underground springs, in fact some of the nearby houses had to be built on piles. A wartime bomb exploded on this site, leaving a deep crater which quickly filled with water and down which the more adventurous boys would climb.

Summer brought organised cricket matches and in Winter football. At the top of the steep path leading down to the allotments was a small pavilion for the players, eventually to disappear like the sports matches. 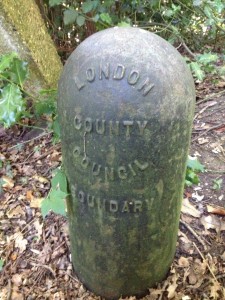 At the far corner of this field was (or still is), a boundary stone marking the end of the L.C.C. Authority, and the border of Kent.

Down Dothill, the lane that lead to Garland Road, was an optical works fenced off and well hidden by trees with a ditch round it. Rumour had it that in wartime it was top secret as gun and periscope sights etc were made there.

Shrewsbury Park is still a place of birds, trees and blackberries, and visited with pleasure by dog walkers, joggers, and many others out for a walk.

I grew up and played in the Park from the mid 1960s to the late 70s . There used to be a drinking fountain in the park  just outside the park keepers yard With my friends I used to metal detect in the park (with the park keepers permission normally a late middle aged lady who wore glasses and was a lovely person) . The oldest coin I found in the park was dated 1721. I still have the coin. We also found lots of other old coins as well as lead toy soldiers and lots of shrapnel. My mothers’ family lived in Brinklow Crescent  opposite the park from the 1930s (my mums family home was destroyed by a direct hit from a German bomb ). I grew up and lived on Eglinton Hill until 1982 when my family left the area and moved to the West Country. I now reside in Rochester. I am proud to be a friend of the park where I  played as a child with my now deceased brother  and our friends. 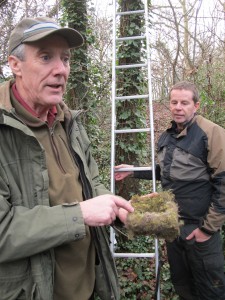 Just after the winds eased up in mid January we met with John Beckham and Martin of the Parks and Open Spaces Department to check and clear out the bird boxes along the Dothill path.  Boxes need to be clean to attract the discerning hens – the females make the choices – and this will be their third season of use.

Box 4 was damaged last year and John will be making a replacement to put back on tree for spring tenants.  The others are intact except for one in which a woodpecker drilled a perfectly circular hole just above the metal plate that is used to deter this sort of behaviour.  That’s a lot of hammering as the wood is 12mm thick and the hole is slightly smaller than the plated opening. We decided to leave it and see if it affects occupancy this season. 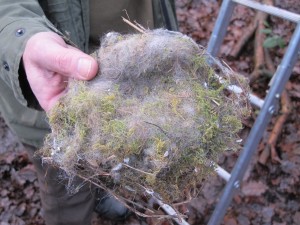 As you can see from the following picture, the nests of the blue tits and great tits are very soft, and are comprised  of moss and other soft materials such as dog hair, sheep hair and any manmade fibres the birds can collect. Even fuzz from tennis balls.  Of the twelve sound boxes, nine had been successfully occupied and three were empty,  although two had droppings from a brief stay.  By John’s knowledgeable estimate that means about forty birds survived after fledging last summer.

A BIG THANK YOU TO MARTIN AND JOHN for their time, interest and expertise on this job.