The Cubs, their parents and their leaders made our Great British Clean Up Day a fun event providing 18 volunteers for two hours gathering (mostly) rubbish and litter along the Dothill pathway. And a big THANK YOU to the three(!) FSP volunteers who turned out.

We had some serious environmental chats with the Cubs who certainly know their way around recycling! Check out the Beavers’ posters still displayed around the Park.

Local  enthusiastic amateur, John Denton, will lead us on a walk through the park – introducing you to local flora and fauna, you’ll learn more than you ever dreamt of about the trees in the park, how they’ve survived and thrived, how old they are and much more!

Meeting point : Notice Board by the car park. Binoculars and magnifying glass would be handy.  Sturdy footwear would be an advantage.

No dogs please.
Rain or shine, we’ll still go ahead

Read and download John’s  Trees Key and Tree Classification in advance of the walk!

This is a belated but heartfelt thank you to the Scouts, Cubs and Beavers and of 10th Royal Eltham Division and their noble leaders who contributed time and energy to regenerating a neglected patch of the park on Plum Lane across from Dallin Road.

END_OF_DOCUMENT_TOKEN_TO_BE_REPLACED

Thank you to Royal Greenwich Parks and Open Spaces for the 2000 free bulbs given to FSP in November. And to Woodlands Trust for the shrub saplings.

They are all planted at last, thanks to the efforts of a select team of members on the last Saturday of January.

Dig out the boots and join one of the Spring Walks and Talks planned: Birds, trees, flora foraging and bats!

Full details for each walk will be up in the park notice boards, emailed to members and on this site as they come up.

All walks are now free but donations to support park projects are gratefully accepted. 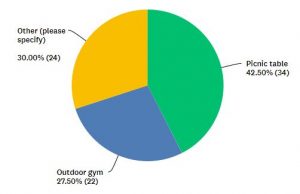 As you will remember we circulated a survey in October after the AGM to find out what you wanted us to spend the fundraising proceeds on in the coming months.

The Picnic Table idea came out on top by quite a margin at 42% followed by the gym at 27%.

The ‘other’ category was for people to add their ideas. The most popular once these were added up was ‘additional park benches’ 3 (4%).

We will update you with progress on securing the picnic tables when we can.

This photo is of the eager Bat-seekers that came along for our annual Bat Walk 7 September.  Les had more bat facts for us and as usual a pipistrelle buzzed the crowd prompting the walk to start!

We explored the different  environments in the park,  getting our night vision sorted out and enjoying the pleasant weather.  A tawny owl followed our progress for awhile (looking for mates not humans) and bats came out to display their aerobatic skills while gobbling  their evening meal!

Thank you to everyone who managed the pre-booking. Please keep an eye out for another walk in May if you missed this one. And thanks for the donations on the night, these go towards a second bat detector.

Have a look at the Bat Conservation Trust website for loads more about these important creatures.  www.bats.org.uk

You may not know but the extensive allotments at the edge of the Park have always been a substantial portion of Shrewsbury Park. On Sunday during the Summer Spree allotmenteers are offering tours of the plots and plenty of advice about growing your own.

Turn up at the Allotment gate at the end of Rowton Road or check at the FSP Membership stall at the Festival for directions.

FSP and Woodlands Farm have collaborated to offer a relaxing ramble through these two diverse green spaces. It will be a  meandering walk discovering varied habitats, plants, wildlife and atmospheres.

Walk begins at the car park entrance to Shrewsbury Park on Plum Lane and includes the woods, Dothill allotments and nature reserve. We then follow Barry Gray through the Dothill gate to Woodlands Farm taking in more woods, hedgerows and the hay meadows in full bloom.  Endpoint is the café with refreshments available! You can retrace the route to the Park or take the 89 or 486 bus back up the hill.

Cost: £2 – Children up to 16 go free.  We will be walking through fields containing ewes and lambs, so sorry, NO DOGS allowed on this walk.

Wear sturdy shoes and clothes for the weather on the day. Any questions about accessibility etc. please contact werfs@gmail.com